Nuts and Crisps, Paper and Coins

Every now and again, I talk about a band I obsess over on this blog. There's not a lot of reasoning behind it, apart from the fact that I enjoy doing it, and it would be cool if other people listened to them. For the last few months, that obsession has turned into yet another band that had great prominence in the 1980's, a decade I wasn't even born into, yet one that I won't shut up about. The band this time is XTC, who arrived in the same boat as Talking Heads, Wire, The Police, riding in on the tidal wave that came from the explosion of punk, rather unimaginatively, known as post-punk. This genre had the anger, energy, and spittle of punk, but it was a bit more moody, arty, and, well weird. Singing like you had a speech impediment, and playing synthesizers along with the crunchy, moody guitars suddenly became acceptable. 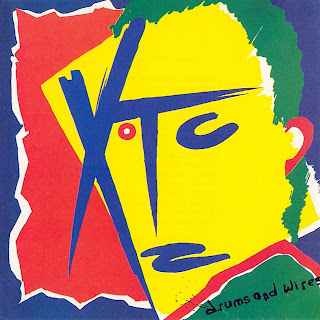 XTC picked up this way with their first two albums, heading in what only described as an 'arty' sort of direction. They even wanted Brian Eno, the go-to guy for weird at the time, to produce their second album, uhm...Go 2. But he politely declined. And whether or not it was due to that, or the departure of keyboard player Barry Andrews, XTC changed and got significantly more new-wave, significantly more pop, on their third album, Drums and Wires. Don't get me wrong, the band's first couple of albums are great, but the sound is of an unsure band, still trying to find their feet.

Making Plans for Nigel, the only single off Drums and Wires, dragged the band into the charts. The song was written and sung by bassist Colin Moulding, and is about a young man pushed into a future that he has little say in. In my opinion, it's one of those perfect singles that can't be tainted with overplaying, even by a little bit. It opens with an odd little drum effect, and I'd be lying if I said I knew the name of it. But it gives the whole track an odd, offbeat feel, that compliments a thudding bass-line, which is iced over with a neat little guitar part. And it perfectly sets the tone for the rest of the album. On the whole, Moulding's bass-lines evolved for the album with an uncommon versatility showcased on the instrument; a springboard-like thud on Helicopter, a creeping ascent on When You're Near Me I Have Difficulty, a sharp, thudding slide on Roads Girdle the Globe. Producer Steve Lilywhite, master of new-wave, also firmly grounded and trapped the sound the band so desperately needed. He also made a return on the equally fantastic Black Sea, which gave birth to four singles and an album which was filler-free. Even the b-sides released at the time, Smokeless Zone and Don't Loose Your Temper still showcase the band's strengths and could hardly be considered second-rate.

Around this time, the band had solidly been touring for years, and despite being on the brink of fame with a number of hit singles under their belt (Making Plans, Generals and Majors, Sgt Rock is Going to Help Me), primary songwriter and lead singer Andy Partridge decided that he (and the band as a result) could no longer continue touring -

"The problem for me was that I was beginning to absolutely hate touring. I wasn’t a young man anymore and my body was starting to rebel against the lifestyle. We’d been doing it pretty much non-stop for nearly a decade and I was sick of it all: the crap food, the hours stuck on a bus with the same faces and the general soul-destroying tediousness of it. I got it into my head that if I wrote an album with a sound less geared towards touring then maybe there would be less pressure to tour." *

The frustration came to a head at a gig in Paris, where XTC were promoting their latest album, English Settlement. Partridge simply put down his guitar mid-song and stumbled off stage without a word of explanation. The band never toured again, arguably ensuring that they never had a drastic increase in popularity. Despite this, English Settlement gave the band their biggest hit with 'Senses Working Overtime', and the album was critically hailed as one of their best releases.

In the next 18 years, XTC would go on to release eight albums, including Psonic Psunspot, which the band released under the pseudonym The Dukes of Stratosphear, a fictional, psychedelic group that showcased the fact that the group never took themselves entirely seriously. The group's popularity waxed and waned unpredictably, especially in the US where the band's reputation increased a little with singles such as 'Dear God' and an appearance on Letterman, but each album threw something new to the table, and couldn't be seriously regarded as a step backwards. 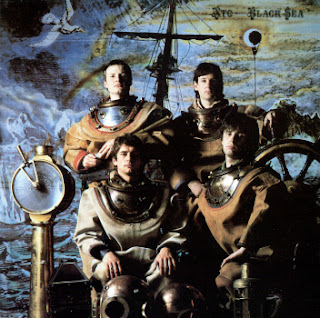 Sometimes, in these little band reviews, I lick the arsehole of the musical talents each member has. In the case of XTC, the group was blessed with two great guitarists in the form of Andy Partridge and Dave Gregory, but the real unrivalled talent can be found in the band's rhythm section. Colin Moulding, an exceptional, self taught bass player first began with thudding minimalist lines, a standard of most post-punk bands. But as the albums stacked up, there are some great, 'busy' bass-lines on just about every track, that explore each of the songs fully instead of following the root note (a great example of which can be found in the song Mayor of Simpleton). The other half of this rhythm section was found in Terry Chambers, who left after English Settlement and was replaced by a number of session drummers. But out of all the arseholes I've ever licked, this is the one that needs the most attention (excuse that ghastly image). Nowhere to be found on top drummer lists, Terry Chambers, the quiet man's man of XTC left a real mark on the sound of XTC's, the sheer number of perfectly executed styles and beats provided on the likes of Black Sea and English Settlement is dizzying.

XTC are still technically going on the back burner as Andy Partridge, the sole remaining member of the band points out. So there's (probably) not going to be any flashy eighties reunion from the band any time soon. And besides, going with the flow isn't something the uncool Swindonians have ever specialized in.

It seems that YouTube links are still the way to go, so here's a list of some of my favourite XTC tracks -

Scissor Man (Regarded as a "silly song" by Partridge it's nevertheless filled with a catchy, manic energy and a fantastic little outro)
Ball and Chain (A moan about unwanted housing developments in the 1980's. There's something about this video that I love, that I can't quite put my finger on, and it's one of my favourite songs from English Settlement.)
Scarecrow People (One of the group's cleverest songs, lyrically and melodically)
Summer's Cauldron (Woah, 1966 era Paul McCartney called. He's willing to get on his hand and knees for that dub bass-line.)
Deliver Us From the Elements  (Not sure what this is supposed to be about, but Jesus Christ, it sounds as if Moulding is trying to warn of the impending Apocalypse, the poor little bugger. Aztecs eat your heart out or whatever)
Towers of London (It's incredibly hard to pick one track from Black Sea, but this grower is well worth the extra couple of listens you may need to give it)
River of Orchids (A truly wonderful track that steps away from what is traditionally regarded as XTC. From the drastically underrated last couple of albums the band put out, Apple Venus volumes 1 and 2)
Radios in Motion (Ahhh, youthful arrogance. Nevertheless, this early taste of the band shows Partridge and Moulding bursting with energy and potential)

P.S -  Fun fact. Have you ever heard of Harry Partridge? He's pretty well known as an animator for things like Saturday Morning Watchmen . Well, he happens to be the son of XTC's Andy Partridge. If that wasn't even mildly interesting, then boo hoo, I don't have any more fun facts for you.

P.P.S - Tired blog entry. The formatting is horrible, and I really need to make the effort in tidying this blog up, I'm aware of how ugly it is. Mistakes/awkward sentences ahoy, sorry.

*Here's where I got this quote

Thanks for reading!
Posted by Calamari at 23:07

Calamari
A third year Journalism student with a sweet tooth and a love of music and cider.